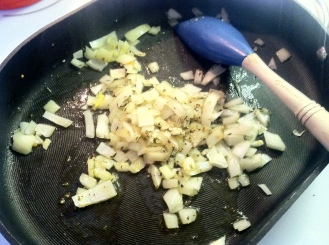 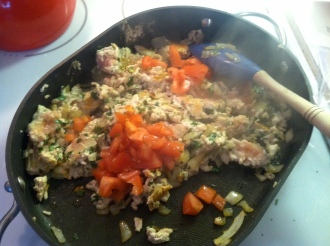 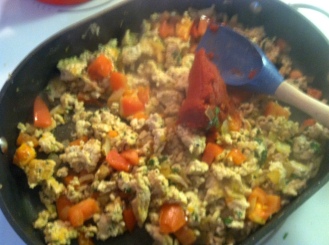 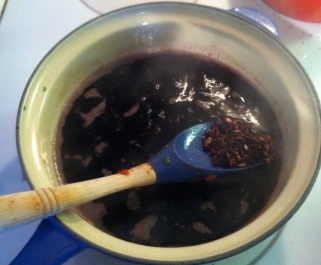 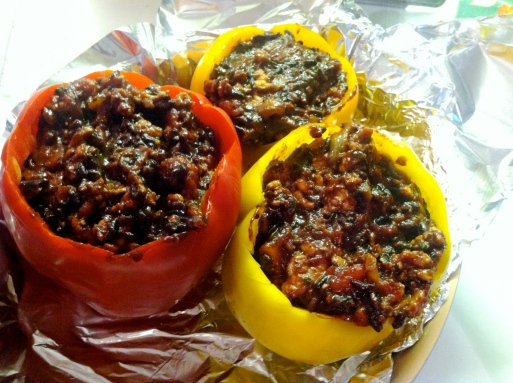 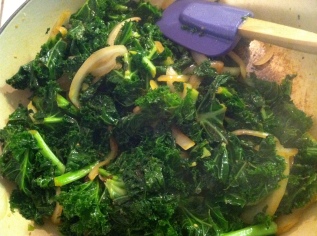 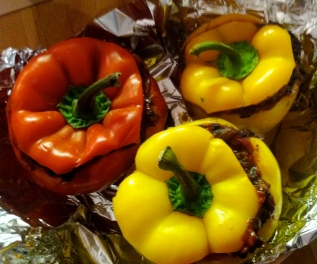 Yep that’s true. Whiskey in my stuffed peppers. Now being from the midwest, stuffed peppers is something I definitely recall growing up with. And it was considered a special dish, because, well, it took some time to make that dish happen. I’ve made stuffed peppers before and like to mix it up and try new combinations to make them more interesting. So today I decided to cook and recruit a few friends over, luring them with the promise of turkey meatloaf (will share that sometime soon). And then- changed my mind. Knowing that I had cilantro and bell peppers in the fridge, and had just also picked up some black rice from TJoes for the first time, I thought why not give it a shot and see what happens. I was imagining a rainbow of color on the plate and a taste that had a kick to it. Black rice is more like purple rice! Warning, the black rice, makes black water (or I thought closer to purple) and it stains a bit if you don’t catch it quick.

Ground turkey in my opinion is tasteless so you have to work it to get flavor. In this case I started out sauteing some onions, garlic and olive oil then added in some caribbean spice. Random, but I really was going for flavor to start. After that, added in the dethawed ground turkey, and some chopped fresh cilantro, sea salt and pepper. Cooked that down and got the black rice going. 4 cups of water for 2 cups of rice (water to a boil and then add the rice, cover and simmer for about 45 min, checking at 30). After the turkey was cooked I added in some fresh roma tomatoes and then I played with the formula, adding in a can of tomato paste, followed by a can of stewed tomatoes, to make the mixture almost double in size. Then I got creative and thought, this could use a little more zing, I went to my liquor cabinet and inventoried and grabbed some bourbon and poured some in generously. Usually if I’d add anything it would be wine. But wine sometimes can create that heavy feeling. Bourbon didn’t do that. Towards the end I added a little bit of brown sugar, more sea salt and ground pepper to achieve the flavor I was looking for.

Cored out the peppers and once the rice was done, added it to the turkey mixture for some beautiful color. Scooped out the mixture and filled up the peppers, topping them with the tops, and popped in the over at 375 for about 30 minutes.

Got the kale going with garlic, olive oil and fresh lemon juice, added in a bag of kale gradually, some more lemon, sliced onions and stirred it around, while the peppers cooked. I had 3 peppers but 4 people, so I decided to make a colorful plate, splitting each of the peppers into sections, having red, orange and yellow on each plate.

End result was a rainbow of color on the plate, and a delightful taste for everyone’s palate. Of course, my friends knowing me well, graciously brought a delicious bottle of zin to compliment our fabulous evening and there were no leftovers. I had a little fun with my friends, and asked them to see if they could figure out what were the mystery ingredients in the dish. I had to give hints for them to figure it out. One was liquor (the bourbon) and another was a green fresh spice… The meal was very satisfying so there was no need for seconds if I had them anyway!

*We opted to head out for icecream and tried the fresh homemade variety from Smitten’s in Hayes Valley. Wow- vanilla, salted caramel and rhubarb crisp were the selection of flavors we chose. Inspiration! I cannot wait to get my icecream attachment for my KitchenAid mixer and make my own. Such a difference when you watch it be made and experience eating it fresh…