As a mom, a stay at home mom, I’m always looking for an easier way to get stuff done. I feel like the Instant Pot was my mom game time-changer. I was on the fence getting one for about a year and a half honestly. I mean I have a crockpot and a Vitamix already! What did I need another appliance for? When we finally decided to get one at Costco, it sat in the box I think for about two weeks. Hey that manual they supply you with is intimidating! (Note: I do not work for or receive any benefit or have any affiliation with the Instant Pot. Let’s just put that out there. I just love the darn thing, and want to share my journey so you can love yours too!)

We bought the Instant Pot October of 2018, around the time my very foggy brain, started to operate semi-normally again, with the birth of our daughter in January and a move to Reno in June of that same year. It was a crazy period in life and really we were still it the midst of just settling into our new life.

Around the time we took the plunge to make the purchase, an amazing chef who I know as a I friend I met when I lived in San Francisco, had just authored and released a cookbook on the Instant Pot. Knowing what a fabulous cook she is (I mean I salivate when I see her posts and adore her stories), I bought her book. Alexis’ book to me, was also a game changer. I can’t tell you how many cookbooks I have that collect dust on the shelf. Hers does not, in fact, even today I flip through it regularly. So when I got it, during our daughter’s naptime, I pulled it out, nestled up with some coffee, and read it. My eyes were opened. At first it seemed like a lot to take it, but I enjoyed the read and glossed over, reread and dove in a few times more.

(Note: Again, let me emphasize I don’t have any marketing affiliation with the author or receive any benefit from her book. I share it because it rocks, and hey we are supposed to be out there supporting and promoting the goodness in our lives to raise up others anyway?)

Her book is fabulous and after absorbing it, I was no longer intimidated by this machine.

I bravely took the Instant Pot out of the box, dove in and began to use it.

The first thing I made was polenta! Ok, for context my husband is Italian and has a passed down generational recipe he follows to the last detail. I glanced at the cookbook, followed the principles and crafted my own. He said it was as good, as the one he makes. If I recall currently (so much is still fuzzy from that time) I think it took under an hour. Don’t ask me why I thought this would be a first good recipe to try the Instant Pot on, but I did and it was Italian brag-worthy good. 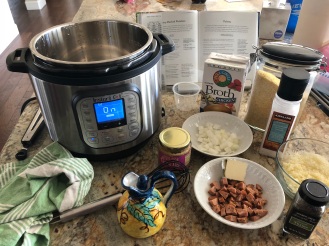 As a rule, I don’t like to follow recipes, but I love to learn guiding principles and concepts that afford me freedom to figure out how to make things for myself, and of course this means my own load of mistakes too. Once I read her book, I used her recipes as guidance, and where I was unsure, I followed them. If you have any level of nervousness with your Instant Pot and for goodness sakes, take it out of the box and get her book. The Instant Pot really can’t hurt you and I don’t think it’s possible to do something insanely crazy except to leave it on the stove (yes, there are people that have done that!)…

What I love about it and still do today, is that whether you are a planner or not (let’s be honest, I’m not a great everyday, follow-the-meal-plan type of person) you can do so much with it, in less time than you can argue why you wouldn’t.

I cook with mine about 2-4 times a week (to be honest I do not cook every single day of the week so it varies) and it is amazing how much stress it has relieved in my life. Because I know with confidence I can prepare an awesome good healthy made-by-me meal, in less time than ever, and more importantly, resulting in better developed taste than a crockpot, oven or grille. Don’t get me wrong these appliances have their purpose, but a lot can happen in the Instant Pot that equally makes you feel like you are cooking and creating (because you are), and not just dumping stuff in and walking away, which by the way, is great too! Plus cleanup is really a breeze. Even in those moments of stickiness or an occasional burn, a scrub here and there with regular dishwashing soap and a hit in the dishwasher, you are good to go! I also love that sauté function. Less things to clean in general. You can do so many things in the pot that just free up the cleaning of the mess you normally get on your stove.

I made some incredible chicken noodle soup, followed by chicken broth last night- yes both, in one night, and was thinking oh my gosh, three years ago, those two things would have taken two separate days to complete. The soup I made happened between 4:30-5:30 and the broth followed 6:00-8:00 and I wasn’t even home to finish it (I had the hubs watch it for me, meaning just unplug the machine in two hours).

I have made many a batch of chicken soup. Some, where I prepare and cook the chicken myself and chop every single vegetable using the freshest of herbs to compliment. Sometimes I start with frozen chicken. And then there’s last night. Where I bought a rotisserie chicken at the store earlier in the day, had some mixed frozen veggies, a few fresh carrots, onion and some celery that were saying, please use me up before my time is up, to produce the most fabulous healthy tasting soup. Sidebar, I cannot stand any waste in the kitchen so everything gets used. You can make a soup- any soup in less than an hour, where on the stove or in the crockpot you are talking half a day at least with you there, guiding it along the way. Seriously. And the results whether you do everything yourself from scratch or use your cheats to shave even more time off your preparation, will be fabulous.

The soup I made last night took 5 minutes to cook at high pressure with 20 min to naturally release the pressure (if you don’t know what that means, definitely crack open the manual or the cookbook!). Total time in prep, to cook, to table was 45 minutes. That’s it. The broth I made took two hours, only 60 minutes of cooking in the pot on high pressure and the next hour it just sat in the pot naturally releasing absolute yummy scents into our home. I literally did nothing, left the house and came back to the best darn broth I have ever made.

So there you go, get that Instant Pot OUT of the box, grab a good cookbook and get started. You’ll love the extra time you get to do whatever else you need to cram into your life. Now go make some chicken noodle soup. Because we all need a SOULful and JOYful lift in the dreariness of winter. Something about soup does that for me, how about you?